Illinois Retailers had their lawsuit dismissed over requirement from Gov. Pritzker to put a sticker on the pump saying the 2-cent gas tax increase scheduled to go into effect on July 1st is suspended for six months.

Retailers threatened to put the required information inside their own sticker letting consumers know the real story – that politicians have more than doubled the gas tax since 2019. I hope they follow through and post this public service announcement. 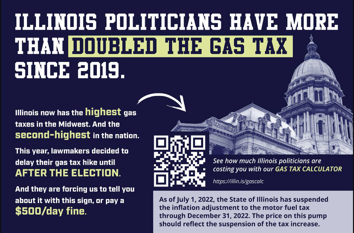 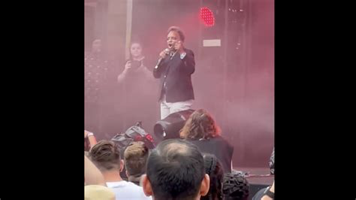 Even as crime continues to roil economic and social life in Chicago, police are spread so thin that in 2021, one of law enforcement’s most basic functions, responding to high-priority emergency service calls in a timely manner, was regularly beyond their capacity.

High priority calls include Priority Level 1 incidents, which represent “an imminent threat to life, bodily injury, or major property damage/loss”. Public records reveal that in 2021 there were 406,829 incidents of high-priority emergency service calls for which there were no police available to respond.

Adding fuel to the fire, Mayor Lightfoot disgraced herself by publicly shouting to a crowd in Grant Park “F*** Clarence Thomas”, and she doubled down tweeting “I said what I said”. The last thing Chicago needs right now is a jeering partisan who cannot manage the bracing challenge of managing a city exploding into violent dysfunction. 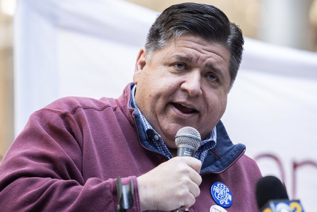 Illinois is already an abortion rights oasis, but Democrats want more, and Planned Parenthood has a list of demands. Even though the state has already fully funded Planned Parenthood, they want Illinois taxpayers to pay a lot more for things like “building capacity” in existing and new locations and funding for “practical and logistic support for patients who face barriers to access because they have to travel”.

Governor Pritzker said on “Meet the Press Now” that perhaps as many as 30,000 people a year will travel to Illinois to receive an abortion, which is up from 10,000 last year. U.S. Senate Democrats have been advised to keep July 6 & 7 open as possible return dates. 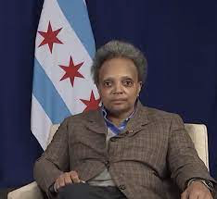 Mayor Lori Lightfoot and her economic development team are trying to use abortion politics to their full advantage.  They personally dropped off letters at Chicago’s main post office to 300 CEOs of Fortune 500 companies located in states where abortion rights are in jeopardy after last week’s U.S. Supreme Court decision overturning Roe v. Wade.

The letter, chock-full of falsities, will be reproduced in a Wall Street Journal ad running later this week and claims that “Companies are facing a new challenge that will impact the health and well-being of their people.”

Don’t Fall For It!

Unions so far have donated nearly $5 million in support of Amendment 1, which is disguised as a “workers’ rights” amendment to the Illinois Constitution but in reality is full of guaranteed tax hikes for all Illinoisans.

It would guarantee a $2,149 property tax hike during the next four years by strengthening union bargaining powers to the point that government would be nearly powerless to control the costs.

School Choice Program Funded By Donors Is Growing In Illinois

Illinois has a tax credit scholarship program that has been operating for the last couple years, and opponents of school choice who say extending public funding to religious schools would be a violation of the separation of church and state were dealt a blow by the U.S. Supreme Court last week.

The court ruled that religious schools cannot be excluded from tuition assistance programs, and the decision invalidates provisions in 37 state constitutions that bar the direct or indirect use of public dollars for religious schools. 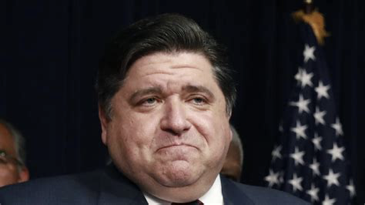 The AG’s report shows that Illinois’ statutory pension payments over the last few years have each been $4 billion short of what the state’s pension actuaries say should have been put in. But, lawmakers arbitrarily get to define the state’s required statutory payment to pensions and as long as it makes that payment, they say the budget is balanced – regardless of what the actuaries say the pension payments should be.

If Democrats keep playing this game, Illinois’ budgets will continue to be a disaster.

And the burden will be placed on you, the taxpayer. 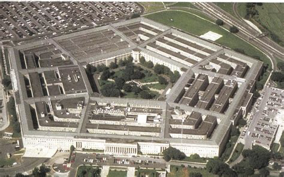 What Is Going On With Our Military??

USAF pilot Lt. John Bowes had to put his religious faith over his dream of flying due to the COVID vaccine mandates within the U.S. military. The 24-year-old was an F-16 student pilot but was taken out of training and prevented from flying since September of last year when he first submitted his religious accommodation.

“I exercised my constitutional and statutory right to receive a religious accommodation. And then I was, as a direct consequence of doing that, removed from training to fly the F-16. I personally believe that is religious discrimination,” he said. There are many more pilots like him who are being denied a religious accommodation and facing discharge, at a time when the Air Force was short 2,000 pilots as of 2019.

Up to 40,000 Army Guard troops are still unvaccinated and at least 7,000 are at risk of being dismissedafter refusing to take the experimental Covid vaccine, as the deadline for shots looms.  According to data obtained by The Associated Press, between 20% to 30% of the Guard soldiers in six states are not vaccinated, and more than 10% in 43 other states still need shots. 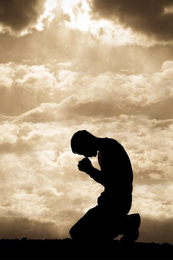