I doubt there's been a day on the campaign trail that Illinois' dire pension situation isn't mentioned by someone.  Last month, Governor Rauner gave us some hope by announcing his support for Senate President John Cullerton's pension reform proposal. 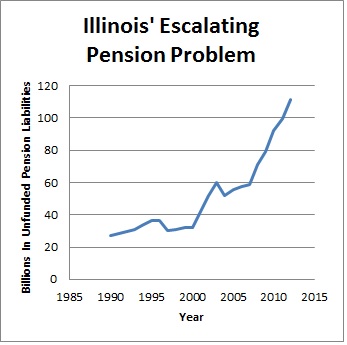 First, let's remember why we are in this predicament.  In 1994, Governor Jim Edgar was joined unanimously by members of the General Assembly in passing legislation to get us out of the pension crisis at that time.  Unfortunately, the Edgar Pension Ramp, as it's called, was easy to swallow in the short term and merely held out promises in the long term.

As most of us understand, long-term promises that are actually kept by politicians are as common as unicorns.

The chart to the right shows just how much the Edgar Pension Ramp failed.  Our unfunded liabilities are increasing by about $10 billion per year.  It's taking money away from needed human services, education, and roads.

While Governor Rauner boldly stepped forward in supporting the Cullerton plan, his hand across the aisle was not taken by the Democrats.  Mike Madigan continued his stubbornness and is holding the state hostage to unions and trial lawyers.  And John Cullerton, who presented this bill two years ago, has now decided to hold the bill.

We all  must take to heart the invaluable lesson of the 1994 Edgar Pension Ramp.  Passing a compromise with the support of the entire General Assembly that pushes our problems down the road is not good government.  It's cowardice.

I voted against the Quinn-Madigan pension reform plan in 2013 because I knew it was unfair to retirees and that it was unconstitutional.  Since then, we've added $20 billion to our unfunded liabilities.

Each day that we delay pension reform, we dig a deeper hole for our children and grandchildren.  It's time to act now and undo the mess created in 1994.